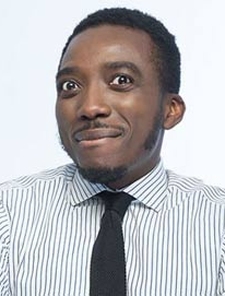 Abovi Ugboma (born September 25, 1979), also known as Bovi is a Nigerian comedian.He is also a director, producer, actor, and writer from Delta State, Nigeria. He has organized popular stand-up comedy concerts like Bovi Man on Fire across the globe. Bovi Ugboma was born in Benin City,where he attended UNIBEN staff schools. He attended secondary school at Ughelli Northern in Delta State, and proceeded to Delta State University where he studied Theatre Arts.Bovi began his career in April 2007,starring in the sitcom Extended Family,which he produced, wrote, and packaged.The show was very popular, and by 2008 Bovi was leading comedy shows and events throughout Nigeria.He participated in Nite of 1000 Laughs organized by Opa Williams. Bovi has worked alongside other Nigerian comedians such as I Go Dye, I Go Save, Basketmouth, Buchi, Odogwu, Okey Bakassi, Julius Agwu and others.

Four One Love
View All Credits
Prev Next ×