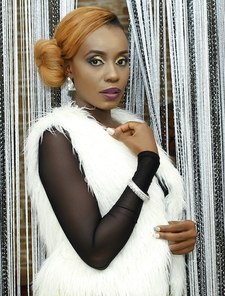 An active player in Nollywood; a Movie Producer with many movies and entertainment works to her credit, some of which have featured prominent A-list actors and actresses like; Pete Edochie, Desmond Elliot,Nora Roberts. Some of her movies like IRREPLACEABLE and SECRET PAIN have been featured on Africa-Magic and other television stations within and outside the country, with her latest works “KENNY’S DIVAS” and “HOW TO PLAY A PLAYER” being among some of the most anticipated works in African Cinema for 2017 viewing.

Earlier in her career, in a quest to develop and encourage fresh talents, who didn’t have the privilege to fulfill their dreams, Adaslim created a talent hunt program titled ”Adaslim Talent Bank” which sought to promote many young talented artistes by providing platforms and exposure for them to explore their potentials and reach for their dreams.

The effort produced one of the most successful and sought-after actresses in Nollywood, Tonto Dikeh, as she was cast for a huge supporting role beign the debut of her movie career, SECRET PAIN 1&2 which was followed by IRREPLACEABLE 1&2 and others, all from the stable of Adaslim Productions Ltd.

Mentored by Nollywood Icon - her godfather - Chief Pete Edochie, Adaslim achieved a great media footprint in her early 20’s and once received accolades as the Most Creative Young Nollywood Producer in Africa.

Having studied Broadcasting, at the University of Nigeria, Nsukka (UNN) Real Estate, at New York Real Estate Institute (NYREI) Manhattan, New York and Communication Arts at the New York University. In a bid to adapt with the ever-changing global trends and boost her insight and competence in TV presenting, Adaslim received an international training in TV presenting at the Los Angeles Film School, California, USA, before launching the flagship TV program - Celebrities with Adaslim in 2010.