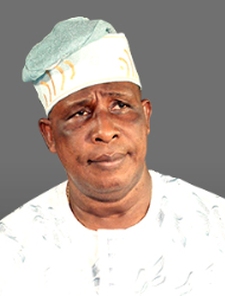 Adebayo Ayoade Salami a.k.a Oga Bello, has been on stage for 49 years. Not once has he given retirement a thought. He started acting with Young Stars Concert Party in 1964 when he was 12 years old. The group metamorphosed to Ojo Ladipo Theatre. He was in school when he joined them. His parents were not interested in the path he had chosen and they went as far as threatening to curse him. He left home and lived with a friend who had a church until his parents came for him. He started acting as a student and later, as a civil servant. He joined the civil service as a library assistant in 1970 and resigned in 1974. In 1976 he started acting full time. He was born in Agege, Lagos but he did not live with his parents. They took him to Okepopo, Lagos Island, where he was brought up. He went to Ansarudeen School, Okepopo but he did not enjoy the privilege of a university education. There was no money but he trained myself and managed to go to Adebodun Commercial School. Later he joined Lagos Drama School which was then affiliated to the University of Lagos. He is married with children.

The Bridge
View All Credits
Prev Next ×