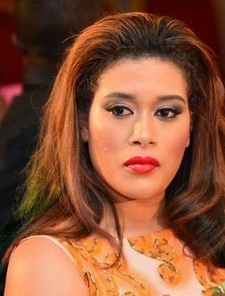 Adunni a Yoruba-born of a Nigerian father and an American mother is the lady behind Date Gone Bad, a new comedy skit making waves online. Adunni Ade is starting the New Year on a bright note.Her video skit, Date Gone Bad, released on Youtube about 10 days ago, has attracted so much attention that it has recorded over 100,000 hits. That sounds very cool for an actress to entrench herself in aiming the Nigeria’s star-studded movie industry.Adunni who is very surprised at the turnout of the comedy skit says “I must say I am shocked at the kind of attention the skit has got,” “I knew it would be good, but I did not imagine it would get up to this level.” Adunni first attracted attention when she featured in Saidi Balogun’s movie, You or I, Fred Idika’s Behind the Cloud (a TV series), Dereck Obasi’s Babatunde Diaries and a new film by Desmond Elliot – Rosemary Roses. Besides, the graduate of Accounting from the University of Kentucky, USA, also featured in Sound Sultan’s music video, Kokose, while she did same for Ice Prince last September.

Born in New York, USA, she grew up in Lagos where she attended Chrisland Schools and The Bells Secondary School, Ota, Ogun State.

It was after her secondary education that she went to study at Kentucky, only to return to Nigeria a couple of months ago. She has no intention to practise accounting. She says, “Entertainment has always been part of me. Even when I was young, I would stand in the front of a mirror, acting out the fashion part of me. I never wanted to be a lawyer or anything.

God blessed me with a lot of talents.” She adds that though her Lagos-based father, who she describes as a ‘big and well successful businessman’ inspired her to study Accounting, neither he nor her (Adunni’s) mum has any problem with her love for show business. “My father supports me 100 per cent.

My mum is very proud of me. Americans don’t care about this kind of thing. They support their children in whatever they choose to do. So, I have no problem building a dream in the entertainment industry. The fact is that I have never been a copycat. I am not looking for the fastest way to limelight. Rather, I want to express myself. My ambition is to be recognized worldwide. But I want to be known for what I have done. I want to be successful through hard work.”

While Adunni says she does not give attention to men when they make suggestive moves to her – say, on location – she enthuses that everyone welcomes her at work.

But when asked emphatically if men have been making all kinds of advances to her, she says, “Obviously!” On how she became fluent in Yoruba, Adunni explains that from day one, she has always been a fan of culture. “I believe you must embrace who you are. I don’t understand why anybody will want to say, ‘I try to run aw
ay from who I am’. You have to be yourself. You have to be proud of yourself.

The Ring
View All Credits
Prev Next ×