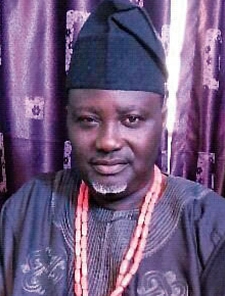 Antar Laniyan is a Nigerian veteran actor, producer and film director.Antar was born in Osogbo, the capital of Osun State southwestern Nigeria. He attended Baptist secondary school in Lagos State before he later proceeded to the University of Ibadan where he obtained a Bachelor of Arts degree in Theatre Arts.He began acting in 1981 and the first major role he played as a professional actor was the role of a "major general" in a film titled Everybody want to know during his days at the Kakaki Art Squad. He has featured in several Nigerian films including Sango, a film scripted by Wale Ogunyemi and produced by Obafemi Lasode. He was the director of the first episode of Super Story, the award-winning Nigerian soap opera produced by Wale Adenuga in the year 2000. He also directed Oh Father Oh Daughter and This Life produced from the stable of Wale Adenuga Production.