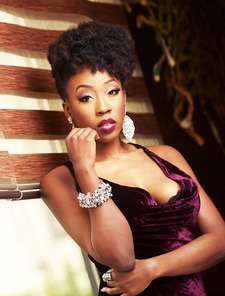 Beverly Naya (born 17 April 1989) is a British-born Nigerian actress. She won the Most Promising Talent category at the 2010 Best Of Nollywood Awards. She also won the award for Fast Rising Actress at the 2011 City People Entertainment Awards.Beverly was born in London as the only child to her Nigerian parents. At 17, she began acting while studying philosophy, psychology and sociology at Brunel University. She also studied script-writing and film-making at Roehampton University. In an interview with BellaNaija, she explained that she relocated to Nigeria because of the rapid growth of Nollywood, and the opportunities that it creates for aspiring actors. In another interview, she cited Ramsey Nouah and Genevieve Nnaji as mentors.

She began acting at the age of 17 whilst studying at the Brunel University in Uxbridge, England. In the year 2011, she was named the "fastest rising actress" in the City People Entertainment Awards in Nigeria, when asked why she returned to Nigeria by Encomium Magazine she said and I quote

"After I graduated from university, I just knew that I wanted to act, I knew I wanted to act, and in London I could shoot a film probably once in a year and that’s it. Whereas coming to this industry, I can build a brand as well as shoot films more often and be given a more diverse amount of scripts. So, I decided to come back for that reason"

In Sickness and In Health

Fifty Shades of Black
View All Credits
Prev Next ×