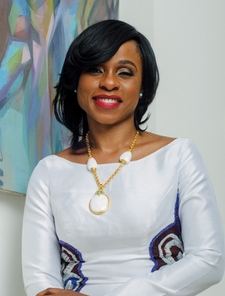 Bolanle Austen-Peters is a Nigerian lawyer and businesswoman.Bolanle was born on 4 February 1969. She is the daughter of Chief Afe Babalola, a Senior Advocate of Nigeria. She attended the International School Ibadan and the University of Lagos for her undergraduate studies and earned a master's degree in International Law from the London School of Economics and Political Science.

With the creation of Bolanle Austen-Peters Productions, she raised the bar in the theater industry with the production of SARO the Musical in 2013 and has since produced five additional plays. In December 2014 and April 2015, BAP productions produced SARO THE MUSICAL 2 at the MUSON Center.

She worked as a Consultant to the Ford Foundation Lagos and helped raise millions of dollars for the Museum through Arts and Business Council.

In 2015, she commenced the production of the film 93 Days, scheduled to be released in 2016
She is married to Dr. Adegboyega Austen-Peters, the son of the late Olofin Ijaye of Lagos, with children.

93 Days
View All Credits
Prev Next ×