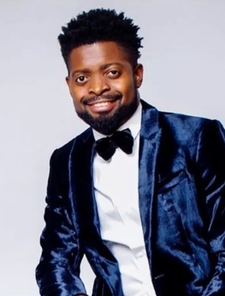 Bright Okpocha, better known by his stage name Basketmouth is a Nigerian comedian and actor. He has organized popular stand-up comedy concerts like Basketmouth Uncensored across the globe.

Bright completed his primary and secondary school education in Apapa (Lagos, Nigeria) and then moved on to pursue a degree at the University of Benin where he studied sociology and anthropology with his brother Godwin.

In 2005 and 2006 Basketmouth won the National Comedy Award and the awards for Best Stand-up Comedian of the Year. On February 14, 2017 to mark valentine's day, Bright had a sold out concert in the famous Wembley arena which made people consider him to be one of the greatest comedians to come out of Africa.

Basketmouth appears in the Africa Magic show 'My Flatmates'.