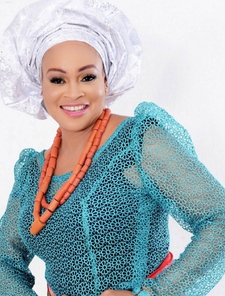 Bukky Wright (born 31 March 1967) is a Nigerian actress and businesswoman.Bukky was born on the 31 March 1967 to a Christian father and Muslim mother in Abeokuta. She attended the University of Lagos, earning a bachelors degee in EconomicsShe began her acting career in 1996. She has featured in several Nollywood movies of Yoruba and English languages, including Wale Adenuga's Television series Super story. Besides acting, She runs a Fashion house and Clothing line, B Collections and a beauty spa, B Wright. She has signed endorsement deals with brands like Chivita. In 2011, she won the Best Nollywood Actress of the Year Award.In 2014, She contested for the post of a Senator in Ogun State House of Representatives under the platform of the Social Democratic Party (SDP) led by former Governor Olusegun Osoba

Bukky's marital life has been a subject of controversy.She has two sons, Eniola and Gbenga. She became a grandmother when one of her sons had a child.