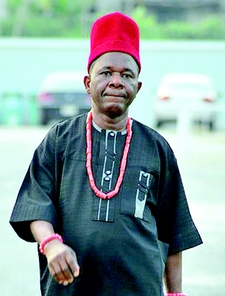 Chiwetalu Agu (Enugu, Nigeria, 1956) is a veteran Nollywood actor, comedian and movie producer who won the 2012 Nollywood award for 'best actor in indigenous movie (non-English speaking language)'. His usage of specific language slang, phrases or clichés in each film has made him uniquely a household name in Nigeria and among Nollywood admirers abroad. While asserting that comic genres is a unique vehicle in projecting Nigerian culture globally as well as establishing the Nollywood brand, Agu is listed as one of the outstanding comedians who have contributed to the development of Nollywood comic genres by Prof. Femi Shaka of the University of Port Harcourt. Agu is married to Nkechi and has three sons and two daughters.Agu's versatility dates back to the transition of Nigerian television soap operas to Nollywood movies. Before the inception of Nollywood, about 31 years ago, television soap opera was the order of the day and Agu featured in Nigerian Television Authority Channel 8 Enugu's Ikoro, produced by Joe Onyekwelu. He also featured in ETV Channel 50, now ESBS. in soaps like Baby Come Now and Ripples (in Lagos), produced by Chico Ejiro's brother, Zeb; in the latter he played the character of Chief Abunna.

Being one of the foremost actors in Nollywood, Agu's ingenuity is unique as an actor because of his wit, humor, invention of specific clichés, customized phrases or slang in every film. For his numerous fans, he is fun to watch any day.

What amazes most watchers is how he combines his well-disciplined life with the wicked or devilish roles he acts in films. Even though Agu has the versatility to play the roles of comedian, wicked or tricky person, he sometimes finds it difficult to reconcile his lifestyle with the negative roles he plays, admitting that he sometimes shed tears for his characters.