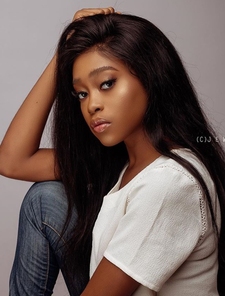 Cynthia Ebijie is an Actor, Tv personality ,Model and a student in Lagos Nigeria. She got into Nollywood quite early in the year 2018 and she’s been doing really well in her acting as she’s featured in a lot of movies. She features in Mnet’s newest series titled, MY SIBLINGS AND I, where she plays the character BIMPE. Her modelling career started at a very tender age,where she contested for the Charming kids Nigeria pageant and she became the overall winner in the year 2009 and traveled to faraway instanbul, Turkey to represent Nigeria in the beauty pageant and she won the miss photogenic, best dancer and so on in the year 2010. She was also the ambassador of Charming kids organisation in the year 2010. Fast forward to 2015 , she contested in the Pearl look beauty pageant where she came out as the top10 finalists in the show. She’s also an Accounting student of Lagos state university. Cynthia Ebijie worked as a Tv host at AFROMUSICPOP channel 326 on dstv. She’s a promising talent and someone we should definitely look out for

My Siblings And I