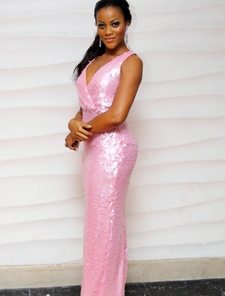 Damilola Adegbite (born Oluwadamilola Adegbite; 18 May 1985) is a Nigerian actress, model, and television personality. She played Thelema Duke in the soap opera Tinsel, and Kemi Williams in the movie Flower Girl. She won Best Actress in a TV Series at the 2011 Nigeria Entertainment Awards.She was born in Surulere, Lagos State. She attended Queen's College in Yaba, Lagos and studied business administration at Bowen University in Iwo, Osun State. Tinsel was her acting debut. She has also appeared in TV commercials and hosted programs on TV.[In August 2014, Adegbite got engaged to Chris Attoh, a fellow actor she met on set of the soap opera Tinsel. In September 2014, the couple welcomed a baby boy named Brian. Adegbite and Attoh privately got married in Accra, Ghana on 14 February 2015.

From Lagos with Love