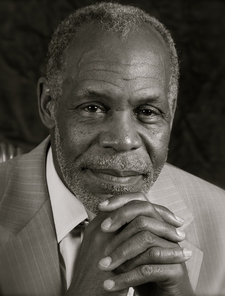 Danny Lebern Glover (born July 22, 1946) is an American actor, film director, and political activist. He is well known for his leading role as Roger Murtaugh in the Lethal Weapon film series, The Color Purple (1985), To Sleep with Anger (1990), and Angels in the Outfield (1994). He also has prominent supporting roles in Silverado (1985), Witness (1985), Predator 2 (1990), Saw (2004), Shooter (2007), 2012 (2009), Death at a Funeral (2010), Beyond the Lights (2014), and Dirty Grandpa (2016). He has appeared in many other movies, television shows, and theatrical productions, and is an active supporter of various humanitarian and political causes.Glover was born in San Francisco, the son of Carrie (Hunley) and James Glover. His parents, who worked as postal workers, were highly active in the National Association for the Advancement of Colored People (NAACP), working to advance equal rights. Glover's mother, daughter of a midwife, was born in Louisville, Georgia and graduated from Paine College in Augusta, Georgia. As an adolescent and a young adult, Glover suffered from epilepsy but has not suffered a seizure since age 35. He attended George Washington High School in San Francisco.[citation needed] He attended San Francisco State University (SFSU) in the late 1960s but did not graduate. SFSU later awarded him an honorary degree. Glover trained at the Black Actors' Workshop of the American Conservatory Theater.

93 Days
View All Credits
Prev Next ×