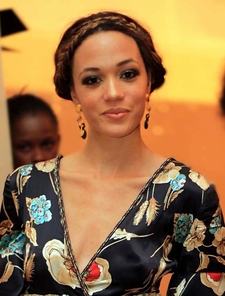 Eku Edewor (born Georgina Chloe Eku Edewor-Thorley; 18 December) is a British Nigerian actress, television presenter, and model. She is best known for her work as host of the entertainment television program, 53 Extra.

Edewor was born at Portland Hospital in London, along with her twin sister Kessiana. Her mother is Juliana Edewor, an interior designer, restaurateur, and art collector originally from Delta State. Her father, Hugh Thorley, is British and has worked in the food and beverage supply and logistics industries. Edewor's parents divorced when she was young and both remarried. Her late stepfather, Peter Thomas, was a businessman and lawyer from Lagos.

Edewor was raised in both Nigeria and the United Kingdom. She lived in Lagos until the age of 13, receiving her primary education at St. Saviour's School and Grange School. Eku then travelled back to the United Kingdom, where she attended boarding school at the Benenden School for Girls. She travelled often with her family, spending Christmases in Eku, her ancestry village in Delta State, and summers in America, Europe, and other African countries.

Edewor attended Warwick University in Coventry, England. She pursued a degree in English Literature and Theatre Studies, graduating with honours in 2008. She then successfully completed a three-month course in acting for film at the New York Film Academy in 2009.

Edewor’s first television appearance was in 2007, when she competed in the reality show Britain’s Next Top Model under the name "Georgina Edewor-Thorley". She appeared in theatre productions while studying at Warwick University and the New York Film Academy. Her first job in the entertainment industry was as a production assistant to producer Damian Jones. She worked at his company DJ Films from September 2008 through October 2009. She appeared in the 2010 film Sex & Drugs & Rock & Roll as "Party Girl".

In 2010, after the loss of her stepfather, Edewor returned to Nigeria to work in her mother's restaurant, the Chardonnay Restaurant and Bar, so that her mother could focus on her career as an interior designer. Five months after she returned, she attended an open audition for co-presenter on 53 Extra (formerly Studio 53 Extra), an entertainment show produced by M-NET and airing on the DStv's Africa Magic channel. 53 Extra is a spin-off of Africa Magic's flagship magazine show Studio 53, which was named for the 53 countries in the African Union. 53 Extra features music, film, fashion, red carpet events, and news about celebrities and industry leaders from across the African continent.