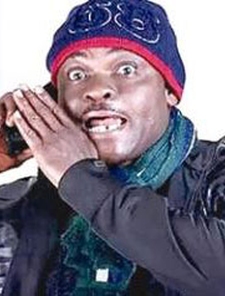 Francis Odega is a Nigerian comic actor best known for a hilarious video clip of him which went viral and circulated the Internet. It brought him to limelight as he secured endorsement deals and recognition from foreign celebrities, an example is 50 cent, who the subject claimed followed him on Instagram Francis holds a bachelor's degree in Economics after graduating from Ambrose Alli University. He is one of the pioneering comedians of the popular Night Of A Thousand Laughs comedy show.In 2013, Francis won "Best Actor" award alongside Hlomla Dandala in the "Best African Collaboration" category at the 2013 Ghana Movie Awards. Francis came into limelight after a scene from the movie series Back From South Africa hit the internet with notable people like 50 Cent and Tinie Tempah sharing the video clip of the scene on Instagram. The scene captures him comically speaking in an American accent