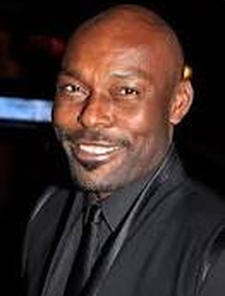 Jimmy Jean-Louis (born August 8, 1968) is a Haitian actor and model best known for his role as "the Haitian" on the NBC television series Heroes. Born in Pétion-Ville, he moved to Paris at a young age to pursue a modeling career. His early roles were in French television commercials and Spanish musical theatre. Eventually settling in Los Angeles in the late 1990s, he had small roles in The Bourne Identity and Arliss before breaking into larger roles in American television and film.
Jean-Louis was born in Pétion-Ville, near Port-au-Prince, Haiti. He lived there until the age of twelve, when he moved to Paris with his family to pursue a modeling career, after moving he experienced a culture shock because of the rural to city lifestyle change. He enrolled in business courses, but quickly realized that his heart lay in performance, and studied at the Académie Internationale de la Danse. His parents returned to Haiti, but Jean-Louis and his brother remained in Paris. Around a decade later in 1991, producers discovered Jean-Louis during one of his dancing stints in a French club, who were impressed. They tapped him to appear in a Coca-Cola advertisement, the success of which prompted the Jean-Louis to spend several years modeling across Europe. He was very successful in London, working for such notables as Gianfranco Ferré and Valentino. Before finding success as a model, he was homeless at times in Paris. By the mid-'90s, he was gracing music videos by such stars as Mariah Carey, Seal, and George Michael, and appearing in low-budget "independent" films in Los Angeles.
Jean-Louis is married to his wife, Evelyn, and they have three children. He enjoys watching and playing soccer and is a member of an amateur soccer club Hollywood United F.C., a team consisting mostly of celebrities and former professionals. He is fluent in five languages: English, French, Spanish, Italian, and Haitian Creole.
After the 2010 Haiti earthquake, Jean-Louis went to Haiti to search for his elderly parents in Haiti the day after a powerful earthquake struck the nation. Jean-Louis learned that a house he had grown up in collapsed, killing several of his relatives. He is the founder of Hollywood Unites for Haiti, a non-profit charitable aid organization whose original mission was to provide sports and cultural education to underprivileged youth on the island. The group mobilized for disaster relief after the magnitude-7 earthquake struck. Recently, Jean-Louis has taken part in a series of campaigns for Haitian aid, such as singing in the "We Are The World" remake of the original for Haiti in February 2010 which aired during the start of the Olympic Games in Vancouver, Canada.