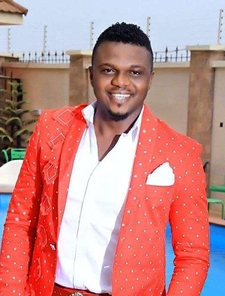 Ekenedilichukwu Ugochukwu Eric Nwenweh, professionally known as Ken Erics Ugo or simply Ken Erics is a Nigerian film and television actor, writer and occasional musician. He is popularly known for his role as Ugo in the movie ‘The Illiterate’ alongside Tonto Dikeh and Yul Edochie.

Erics was born in Kano State, Northwest Nigeria on 28 February 1985 and is the sixth of seven children of Eric Chukwuemeka Nwenweh and Grace Ifeyinwa Nwenweh both of Enugwu-Ukwu in Anambra State, Southeast Nigeria. He is of Igbo descent. Erics had his primary education at Binta Mustapha Science Nursery and Primary School, Kano, and his secondary education at Dennis Memorial Grammar School (DMGS) Onitsha, Anambra State. As a young child, Erics showed a passion for the arts, and this culminated in his admission to the Nnamdi Azikiwe University Awka, Anambra State, where he graduated with a degree in Theatre Arts. He also holds a master's degree in Theatre and Film studies.
Career

In 2001, as a first year student in the University, Erics got his first movie role, in the Chris Ubani directed ‘direct-to-dvd’ movie ‘Holy Prostitiute’, where he played a minor role as a medical doctor, with just three scenes. He went on to graduate from the University and began to attend auditions and bagged a few other cameo roles in home movies. However, his 2012 portrayal of "Ugo" in the movie "The Illiterate" endeared him to audiences and opened up more opportunities for him in the Nigerian movie industry.

As a writer, Erics first published work "Cell 2" has gained attention and has been used in a number of Nigerian tertiary institutions for stage productions and academic purposes.

As an occasional singer and musician who plays the guitar and keyboard, Erics, who had earlier run his own musical band, has been involved in the production of a number of original movie soundtracks.