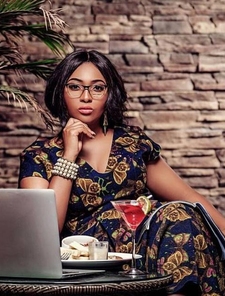 Lilian Esoro Franklin is a Nigerian actress,an event planner, and also the CEO of Goldie Locks hair salon situated in the capital city of Abuja Nigeria. The Imo State-born beauty is the youngest in a family of seven. She completed her primary and secondary education in Lagos. She started off her acting career in 2006 with "Extended Family" and since then she has starred in a couple of soap operas like CLINIC MATTERS a popular family sitcom where she plays the role of Nurse Abigail, a stage play titled 'Ayetu', 'I voted now', and 'Strive'. Esoro is also a young stars ambassador, she is the brand ambassador of Dunes, Abuja and House of Lunnete Ambassador. She was nominated for Best Actress in a Comedy at the 2013 Africa Magic Viewers Choice Awards.Esoro's acting career started in 2006, she featured in the soap opera Extended Family, however she became more notable when she featured in a soap opera titled Clinic Matters as a character named 'Nurse Abigail'.In 2015, she became the brand ambassador of House Of Lunettes.In 2016, Esoro signed an endorsement deal with Abuja luxury shopping centre, Dunes.Esoro grew up in LagosShe studied Political Science at University of AbujaShe recently got married to TripleMG CEO Ubi Franklin on 1 November 2015

Truth or Dare
View All Credits
Prev Next ×