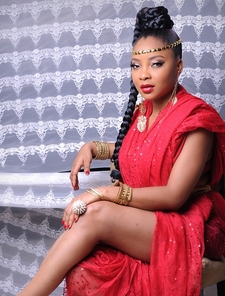 Linda Ejiofor (born Linda Ihuoma Ejiofor) is a Nigerian actress and model known for her role as Bimpe Adekoya in M-Net’s TV series Tinsel. She was nominated in the category Best Actress in a Supporting role for her first feature film, The Meeting (2012), at the 9th Africa Movie Academy Awards. Tony Ogaga Erhariefe of The Sun Nigeria listed her as one of the 10 fastest rising Nollywood stars of 2013.Ejiofor was born in Lagos, Lagos State, Nigeria; and She is the second of five children. She is a descent of Isiukwuato in Abia State, Nigeria. She attended Ilabor Primary School, Surulere. She then furthered her studies at Federal Government Girls’ College, Onitsha, and studied sociology at the University of Port Harcourt.Ejiofor initially wanted to work for an advertising agency. In an interview posted on The Nation, she said that she’s fond of acting, and changed her mind about pursuing a career in advertising. She hopes to direct films in the future.

A Soldier’s Story 2: Return From The Dead

She Is
View All Credits