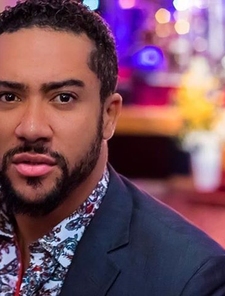 Majid Michel (nicknamed Shaker, born 22 September 1980) is a Ghanaian actor. He received nominations for Best Actor in a Leading Role at the Africa Movie Academy Awards in 2009, 2010, 2011, 2012 and 2014. He eventually won the award in 2012 after three previous consecutive nominations.Michel was born in Cantonments, a suburb of the Ghanaian capital Accra. The son of a Lebanese father and a Ghanaian mother, he grew up in Accra with his nine siblings. He attended St. Theresa’s Primary School, and later, the Mfantsipim School, the alma mater of Van Vicker and also of former United Nations Secretary-General Kofi Annan. In secondary school, Michel was actively involved in theater and was a member of the school’s Drama Club. As a member of the drama club, he received a Best Actor Award in one of their performances on Emancipation Day in Cape Coast, Ghana.

Michel entered professional acting by auditioning for a modelling agency; a neighbour had introduced him to that agency. He was invited to join the modeling agency, Super Model Agency, on the behest of his next-door neighbour. He starred in the television series Things We Do for Love, acquiring his nickname “Shaker” on the set. His role on Things We Do for Love was to be played by a Lebanese boy, and Michel attributes being given the role due to his Lebanese heritage.

Things We Do For Love became a success and propelled him into the mainstream. On the strength of his performance in the series, he was cast in his first movie, Divine Love, as the male lead, alongside Jackie Aygemang as the female lead, with Van Vicker in a supporting role. All three used their roles in the movie to debut their movie careers. Divine Love was a huge success, turning Majid Michel, Jackie Agyemang and Van Vicker into household names across Ghana.

In 2008 Michel starred as the lead role in the film Agony of the Christ, which received seven nominations at the Africa Movie Academy Awards in 2009

A Reason To Kill

The Beast
View All Credits
Prev Next ×