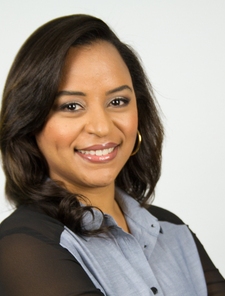 Michelle Bello (born Michelle Aisha Bello; 30 September 1982) is a British Nigerian film director and film producer. She is also CEO of a Nigerian-based entertainment and publishing company, Blu Star Entertainment Limited. Bello was born in London, England.The younger of two children, Bello was born in September 1982 to Abdullahi Dominic and Sylviane Bello. Bello is of Nigerian, French, African-American and Congolese descent. She spent her early years in Lagos, Nigeria, attending nursery and primary school and at the age of eight, left for England where she obtained both her GCSE and A-level certificate. It was while growing up in England that she discovered her passion for film making and never looked back.

Bello moved to the United States in 2001 to study communications (specialising in Visual Media) at the American University in Washington D.C. While there, she made several short films and during a study-abroad programme in Prague, the Czech Republic, Bello made her first 16mm short film entitled Sheltered.

After graduating from the American University in 2005, she moved back to Nigeria to pursue her dreams of becoming a film producer/director. In 2007, Bello worked with prominent TV producer and presenter Mo Abudu as an Associate Producer on her hit MNet TV show Moments with Mo. Soon after, she produced the award-winning music video Greenland for well-known artist and photographer T.Y. Bello.

Michelle produced and directed her first feature film called Small Boy in late 2007. The movie became an instant success in the US as out of 400 films, it was nominated for two awards at the American Black Film Festival in Los Angeles the following year. The nominations were the Heineken Red Star Award for 'Innovation in Film' and the Target Filmmaker Award for 'Most Inspirational Film'. On the home front, Small Boy went on to win two African Movie Academy Award for 'Best Art Direction' and 'Best Young Child Actor' in April 2009. The movie premiere took place in Lagos, Nigeria in May 2010. with Nollywood stars and industry practitioners in attendance.

Thereafter, Bello returned to the United States and earned a master's degree in Communications, specialising in Film Directing, at Regent University in Virginia. She took the opportunity to develop her craft and made several short films. While at Regent University, Bello was selected to do an internship with the world-renowned ICM Talent Agency at the 2011 Cannes Film Festival. She also attended the Sundance Film Festival that year as part of a class programme organised by the university and met several prominent film makers during her stay.

After her graduation in December 2011, Bello returned home to join the thriving industry known as Nollywood.