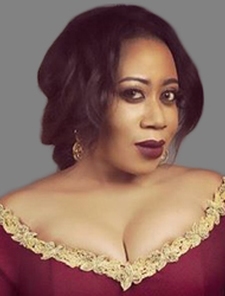 Moyo Lawal is a sexy nollywood actress who made her debut in a television series titled Shallow waters which she played the role of chioma, .. Yoruba actress, Moyo Lawal was born in Badagry in Lagos State, Nigeria. She is well known for her role as Chinny in the M-Net soap opera, .She picked up the pieces of her early ouster and has gone on to feature in scores of high profile TV soaps and movies such as Shallow Waters, Binta and Friends, Eldorado, D8, Flat Mates, Dancehood and most recently Tinsel. The Curvy Nollywood actress, Moyo Lawal, recently cleared the air on the series of speculations that she might have had a butt implant, taken pills or used booty cream to enhance the size of her bum-bum.Taking out time to correct the wrong impression that has loomed over her for some time, the curvaceous actress took to her Instagram page to clear the air when she uploaded a video of herself engaging in a series of physical exercises that has over time made her butt as big as it is.