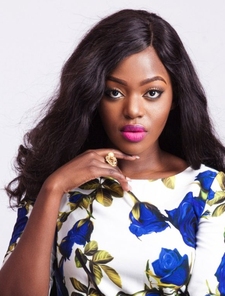 Okawa Shaznay is a Nollywood actress from Cameroon and the first from her country to successfully break into Nollywood with her role in the blockbuster movie Iyore; starring alongside Rita Dominic and Joseph Benjamin. Okawa Shaznay has also gained more prominence with her leading role in the 2016 hit TV series Delilah: The Mysterious Case of Delilah Ambrose. She won the Exquisite Lady of the Year (ELOY) award for TV Actress of the year in 2016 for her role in Delilah.
Okawa Shaznay was born in Cameroon. she began her secondary school education in Presbyterian Secondary School Mankon, Bamenda, Cameroon. Shaznay later moved to the United States for higher education, where she graduated with a bachelor's degree in accounting from Texas Southern University.
Shaznay developed interests in performing arts at an early age taking part in stage plays and small film projects in her home country. With the huge influx of Nigerian movies into Cameroon at the time and ongoing it introduced her to the world of Nollywood in the 90's which she grew to love and admire. Shaznay featured in her very first movie in Cameroon called "Master DJ" in 2004. She later moved to the United States in 2005 for higher education where she later graduated in 2009 with a bachelor's degree in Accounting from Texas Southern University. It was in houston tx she joined the All Africa Theater group with whom she moved on the road with for 2 summers performing an adaptation of Chinua Achebe's "Things Fall Apart" playing Ezinne. After then she went on to do a little over 10 African films in the U.S working alongside some of nollywood's biggest stars.

During this period from 2010 Shaznay began to have a buzz in the African film industry and was cited in Dulce Camer's 2010 top 50 Cameroonians to watch out for. A former miss Cameroon USA; She burst into the Nollywood /Gollywood scene in 2013 with a big-screen role in the movie “Cheaters” directed by the legendary African film director Frank Rajah Arase for which she was nominated as Most Promising Actress in the 2nd annual 2013 Golden Icons Academy Movie Awards. She also starred in the 2016 released movie project "REFUGEES" which was filmed in Ghana in 2012 and completed in Atlanta USA towards the later months of 2013. She starred in her first movie shot in Nigeria in 2014 which is the highly anticipated movie Iyore starring alongside Nollywood screen queen Rita Dominic and Joseph Benjamin. Okawa also gave a mind blowing performance in the 2014 well received movie "Sisters at War" a.k.a. (Sister's War/Sister's Apart) starring alongside Jackie Appiah and Yvonne Nelson.