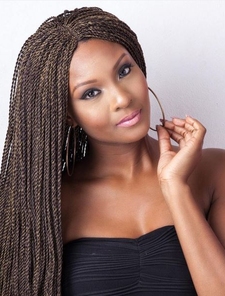 Osas Ighodaro Ajibade (born Osariemen Martha Elizabeth Ighodaro; 26 October) is a Nigerian American actress, host and humanitarian. She won the Miss Black USA Pageant in 2010 and founded The Joyful Joy Foundation, raising funds and awareness towards the fight against Malaria. Additionally, she co-hosted the 2014 Africa Magic Viewers Choice Awards. She played the role of Adanna (Danni) on the soap opera Tinsel, and won Best TV Actress of the Year at the 2014 ELOY Awards.Ighodaro was born in Bronx, New York, United States, to Nigerian parents from Edo State. She obtained her first degree in broadcast journalism with dual minors in entrepreneurship and theater from Pennsylvania State University. She further obtained a master's degree in fine arts from the Actors Studio Drama School at Pace University. She moved to Nigeria in 2012 with plans to spend just six months and return to the United States; she however got other jobs, along with Tinsel and hasn't moved back since then. She hosted the Maltina Dance All Reality show. She is the founder of the Joyful Joy Foundation and is a member of Alpha Kappa Alpha sorority.She is married to Gbenro Ajibade. They have a daughter.

Paradise
View All Credits
Prev Next ×