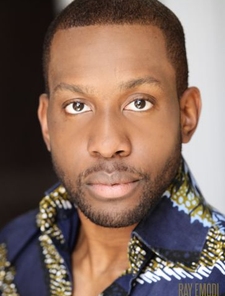 Ray Emodi is a Nigerian-born actor who knew from an early age that he wanted to entertain people through artistic performance. Emodi, who was born in Enugu, moved to Nottingham, England for university in order to obtain a Business Management and International Strategic Enterprise degree. While getting his degree, Emodi acted in three films in order to "quench his thirst" for performing.

Emodi quickly realized that Nottingham was not the place to be if he wanted to pursue his dreams of acting as a career. So after much preparation, Ray made the big move to Los Angeles, California. During his first year in LA he completed a long list of incredible films and has shown no signs of stopping. During this time, he trained in various skills such as stage combat, Shakespearean acting, improv art, and Tai Chi.

So far, Emodi has been credited for his starring roles in several award-winning films including A Daughter’s Dilemma and God’s Own Villa, as well as others. Ray is an incredible actor whose emotional versatility and adaptable look make him a hot commodity in the film industry.