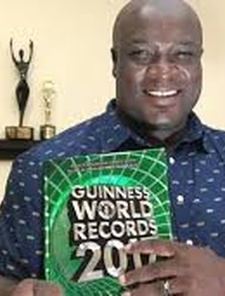 Peters was born in Sabon Gari, Kaduna, Northern Nigeria and is the second of eight children. His parents are Lawrence Adagba and Comfort Peters. He is of Afemai descent and hails from Ososo in the Akoko Edo local government area of Edo State.

Peters began his formal education at St. Gregory Primary School in Kaduna. He attended the University of Jos Nigeria, where he studied Geology and
Mining.Peters began his career as an actor in the 1998 movie Mama Sunday in Nigeria, and went on to play the role of Paul in 2002 in the daytime series Everyday People created by Tajudeen Adepetu. In 2004 he relocated to the USA, where he enrolled for a certificate degree in “Visual Storytelling” hosted by New York University. Peters then associated with Film Career Connection in Atlanta, which offered him on-the-job training on various film sets across the United States of America. He also enlisted with REDucation; a real world training on Red camera and equipment, taught by working professionals, for current and future working professionals.

In 2014, it was reported that the comedy film, 30 Days in Atlanta, directed by Peters, was the highest-grossing film of all time at the Nigerian box office, the movie was also featured in the 2017 Guinness book of records as one of the films with the highest domestic gross in the territories of Bollywood, Nollywood and Hollywood, listed alongside PK (from Bollywood) and Star Wars: The Force Awakens (from Hollywood)

PARADOXE
View All Credits
Prev Next ×