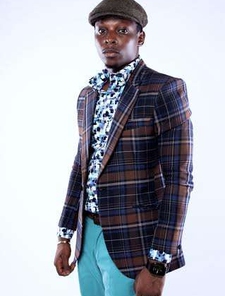 Rotimi Salami is an Actor, Producer, Director, Writer, Set Designer and C.E.O Monski Media Concept. He hails from Lagos State, Nigeria. Holds a B.SC in Sociology from the lagos State University, Lagos and a Diploma in Directing from the NewYork Film Academy.
He started acting since his primary school days, he was a member of the drama club. He delved into acting professionally in 2007 after he realised he has deep passion for it. He started going for auditions relentlessly until he finally got a role in a movie titled 'Unknown Revenge' and then got a role in a TV series titled 'Shangisha KIngdom' produced by Ola Razak, C.E.O Cobweb Audiovisual Production, his acting career kicked off from this production house. He has since been part of several Tv series and movies like; Kuti's Career Palace, Tinsel, Emerald, Super Story, Silent night, Dear Mother, Bella's Place, Unknown Revenge, Leave My Boyfriend, 11th Hour, About to Wed
, One Love, This life, Papa Ajasco, Cascade (Unicef), Crack in the Wall, Alan Poza, Just to mention but a few...
He grew from an actor and tried his hands on producing and directing after obtaining his diploma in Directing from NewYork Film Academy in 2010, He produced and directed a TV sitcom, Kuti's Career Palace that is a hilarious story based on the general career challenges in all stages of life especially in Africa, it airs on 7 major states in Nigeria and it got high ranking in terms of viewership and reviews, no wonder it bagged a nomination for the African Magic Viewers Choice Award 2014.
He also produced and directed two short films in 2011/2012, 'Letter to my Mother' and 'Beautiful World'.
He is a very ambitious, focus driven, a go getter, hardworking, die hard visionist, Adventurous, determined and strong willed young man. He is always positive minded even in the face of millions trials because he believes God will always grant him the wisdom to excel above all his trails and become victorious. He is so talented and has touched almost every arm of filmmaking that he sums them up and describes himself with one word a FILMMAKER.
He intends to be able to use his company to educate and create job opportunities in the entertainment industry for passionate actors and aspiring filmmakers, while adding financial and commercial value to every life touched they intend to affect the public positively with high quality film productions and stories.
He is presently working on some film projects and film institution for Lagos State. Rotimi Salami for you guys...
You can reach him on Facebook via: https://www.facebook.com/rotimi.rasaksalami
Twitter Handle: @rotimi_salami

Jack Of All Trades
View All Credits