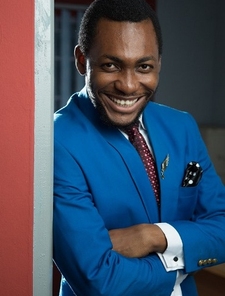 Temitope Christopher "Tope" Tedela is a Nigerian actor and producer. He gained recognition for portraying Julian on the television series Edge of Paradise. He came into limelight after playing the lead role in the 2013 film, A Mile from Home, for which he was nominated for Most Promising Actor at the 10th Africa Movie Academy Awards. He has also received several awards including Africa Magic Viewers Choice Award, Nigeria Entertainment Award, Best of Nollywood Award, Nollywood Movies Award, Golden Icons Academy Movie Award and Express Star Award for his role in the film.Tedela was born in Lagos, as the first child of his parents. He is a descent of Ekiti State. He attended Lagos State Model College, Meiran, Lagos for his secondary education and earned a degree in Mass Communication from The University of Lagos.His screen debut was in the family TV Series Edge of Paradise where he played the role of Julian. He stopped acting for a while in order to concentrate on his studies; while in school and shortly after graduation, Tedela worked at UNILAG FM. He made a return to star as lala in his first leading role in the feature film A Mile from Home. He has also worked as an OAP for radio stations like 96.9 Cool FM in Lagos, and was a one time news anchor of the NTA. He acted in several notable stage performances.