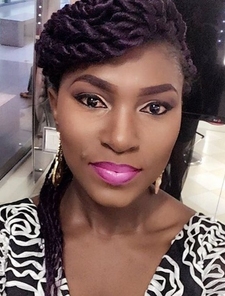 Ufuoma McDermott (oof-oh-ma, stay-see, edge-air-no-bore, born Ufuoma Stacey Ejenobor, 23 April 1981) is a Nigerian actor and former modelEjenobor was born in Benin City to Nigerian parents who hail from Delta State in Nigeria. She moved a lot - from Benin City to Jos, where she spent the better part of her toddler years, and later to Lagos, where she has lived for the greater part of her life and still resides till date. At the age of seven, her father coined a pet name for her: ISIO (which means "star" in Urhobo). She was so named after the star actress of the TELEFEST programme put together by NTA Benin, The Pot of Life.Ejenobor got married on 23 April 2010 to Steven McDermott. She officially changed her name to Ufuoma McDermott on May 23, 2014 at a Lagos high court. Ufuoma and Steven McDermott have two children: son Isio Jared (born 10 October 2012) and daughter Kesiena Alize (born 8 August 2015).

In 2011, She attended New York Film Academy in Los Angeles for an acting course and later on a film making course from Dov Simen’s Hollywood Film Institute. In 2013, she obtained a certificate in Human resource management from the London Business School.

In Summer 2015, she was part of the Relativity Education program from Nigeria, owned by Relativity Media in Beverly Hills.