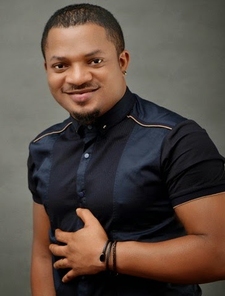 Walter Anga was born Walter Angapukotanka Kalada Anga on January 12, 1978. He is the third of five children sired by the union of Chief Stephen T. Anga (JP) and Mrs. Evelyn Nyengimina T. Anga.

With his father being a highly respected chief in his hometown Ogu (in Ogu/Bolo LGA of Rivers State), Walter- like his other siblings- was raised in a very traditional background allied with a liberal Christian bias. An upbringing of this kind shaped his early life and saw him blossom into an open-minded individual as well as a liberal social progressive.
His father was an educationist and a high-ranking civil servant (until his retirement in 2003) who would ordinarily give his all to provide for the family. Theirs was the typical middle class family in the springtime of the civil service- one which enjoyed life’s basic necessities- education inclusive. Walter, alongside his other siblings, thus received education of appreciable standards up to university level.
The formative years of his education saw him attend Army Children’s School, Rainbow Town, Port Harcourt wherefrom he received his First School Leaving Certificate. After this, he received his high school education from Stella Maris College Port Harcourt, the prestigious County Grammar School Ikwerre/Etche, and Government Secondary School Ogu. He then proceeded to the Federal College of Education (Technical), Omoku for a brief spell in tertiary education before finally settling to study theater arts in the University of Port Harcourt (UNIPORT), Choba, Rivers State. From this institution he obtained the Certificate in Theatre Arts (CTA) qualification as well as a bachelor’s degree in Theater Arts. In his time in UNIPORT, Walter participated in in-house productions- acting in a number of plays and stage adaptations as a consequence. This way he sharpened his acting skills and eventually emerged as an acting major at the end of his training. He also ran for office in the department of theatre arts and administered the office of Director of Socials (DOS) in the Association of Theater Arts Students (ATAS) for a single term in 2001. All of these served to prepare him for an active life in the glare of the public eye, just as he was toughened for the drudgeries and tempestuousness of a career in film making.At the end of his university days, Walter Anga ventured into the world of movie making. And after a few tries, he got his first break in front of a movie camera in 2003 with a role in the blockbuster hit, LABISTA. Since then, he has gone on to feature in over 100 movies- garnering massive experience and gaining more than a decent dose of exposure in the courtesy of many tours round the country. And just like fine wine, he has improved with age. In August 2009, Walter wed his wife Esther and about a year later they welcomed their first child, baby Tyrese.

War In The Palace

Heart Of A Fighter
View All Credits
Prev Next ×