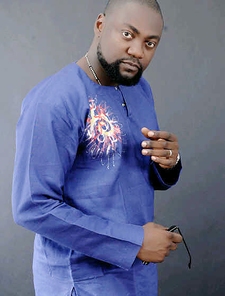 Yemi Blaq was born and raised in a family of four siblings in Ondo state Nigeria.. They are all artistically inclined. He grew up knowing he was going to go into the arts.
He revealed: right from his primary school days he got a lot of encouragement and support. After he played the role of ‘Incorruptible Judge’ his teacher came home and said to his mum, ‘oh this one is going to become an actor. Since then he has nurtured it up.
Speaking On His Parents Support:
My parents are quite different. My mum loved the idea. Sometime after my primary school experience when I was in Form 1 there was a school play we toured with and went to show at the town hall. I remember the look in my teacher’s eyes as she told my mum, ‘look this is what this boy is supposed to do’.
At that stage one is still confused as to what he wants to do. But I remember that my mum liked it. Maybe because she also used to act in school plays and she had lead roles as queen or princess.
My father is a very liberal person who believes one should be happy regardless what profession one settled into. He never tried to model us into a reflection of what he thought we should but rather supported and encouraged us to be what we wanted to be.
One or two of my siblings had reservations but all that is gone considering how much I have achieved.
In his words:
I always wanted to act, I always love acting. I used to act back in school days. I studied theatre arts in school. I travelled and after I came back I joined AGN (Actors Guild of Nigeria) in the year 2005

Yemi believes he was one of the lucky ones because he got into the industry when everyone said it was a bit tough. He was in it for about five or six months auditioning for roles, going to the National Theatre, talking to people. Then he ran into a really large audition which turned out to be a grand encounter.
The first couple of days he didn’t get any chance then the third day someone walked up to him and said, ‘you, where have you been’? And he said he's been here all day they got into an argument about that until he told him what he wore on the previous days. Then the man said to him he had given the role to Desmond’, but would get him other projects. He asked him to read some more which he did. In the end he got the lead role. It was in the movie, ‘Lost to lust’.
My first experience on set was with Obi Osotule and Mathias Agbo in Benin city. They were shooting this movie The unseen eyes and I had gone there to just flex my acting muscles. I got on set with the rest of the people who came for the audition and we started reading.
Immediately I got in there they called me Steve and I said but my name is not Steve, I’m Yemi Blaq and they said, no you are not Yemi Blaq. I got quiet worried because I didn’t get where the whole Steve thing was coming from. I later got to know Steve was a character I really looked like in their mind. To cut the story short. I read the script and at the end of the day,

P.W.D
View All Credits
Prev Next ×