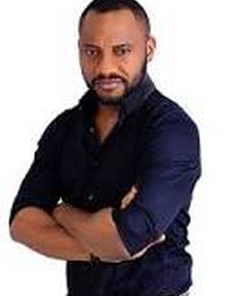 Yul Edochie (born Yul Chibuike Daniel Edochie 7 January 1982) is a Nigerian actor, named after popular Russian actor Yul Brynner.[6] He is the son of Nigerian actor Pete Edochie. He was raised both in Lagos and Enugu. He is the last of 6 children. He got married at the age of 22. He Attended University of Port Harcourt, where he received a Bachelor of Arts in Dramatic Arts.
Yul attended Lillians' Day Nursery School and Robinson Street Primary School, Enugu between 1984 and 1992. His secondary education started from 1992 to 1998. In those 6 years he went to Marist Brothers' Juniorate, Uturu , University Secondary School Enugu, Ecumenical Community Secondary School Enugu and New Haven Boys Secondary School Enugu Respectively.
He is married to May Aligwe and has 2 sons and a daughter.
He Joined Nollywood in 2005 in his first film titled "The Exquires" alongside the Late Justus Esiri and Enebeli Elebuwa. He got his break in 2007 after featuring alongside Genevieve Nnaji and Desmond Elliot in the movie "Wind Of Glory".

My Daughter
View All Credits
Prev Next ×