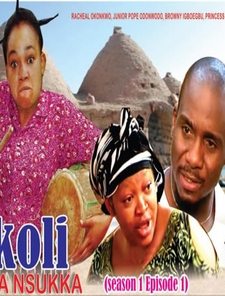 Nkoli Nwa Nsukka, aptly named, is the story of Nkoli a young girl growing up in Nsukka with her sick mother, a younger brother and a man she is intensely in love with. The movie/series stars Rachel Okonkwo as Nkoli and Pope ‘Jnr’ as Magnus (her love) with many other appearances by many actors as the movie/series goes on.

In the first season/episode we are introduced to Nkoli who has one or two money problems but still walks around with a smile on her face wherever she goes. This is what attracts the engaged city returnee, played by Browny Igboegwu, to her. He falls for her and ignores his English and Igbo speaking, light skinned Lebanese imported wife to chase Nkoli. Nkoli ends up rejecting him and so the story proceeds.