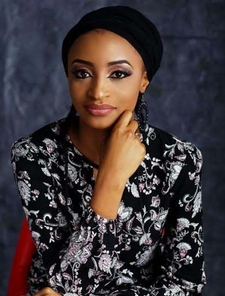 Rahama is an actress, dancer and producerShe is the winner of Best Actress (Kannywood) at the City People Entertainment Awards in 2014 and 2015. She won Best African Actress at the 19th African Film Awards in 2015 by African Voice.

The Business Administration graduate of Kaduna Polytechnic joined the Hausa film industry, Kannywood in 2013 and is one of the few Hausa on-screen characters who speaks both English and Hindi languages fluently. Rahama played a few minor roles before gaining fame from her performance in “Gani ga Wane” alongside the popular Kannywood actor Ali Nuhu.

In addition to acting, she participates in charity works and most recently visited an IDP camp in Wasa, Abuja, Nigeria. This was organised by her charitable initiative Ray of Hope. Rahama participated in the 2015 Cancer day Walk organised by Medicaid.

If I Am President