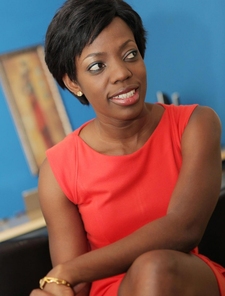 Shirley Frimpong-Manso (born 1977) is a Ghanaian film director, writer, and producer. She is the founder and CEO of Sparrow Productions, a film, television and advertising production company. She won Best Director at the 6th Africa Movie Academy Awards. Frimpong-Manso is also a principal of Sparrow Station, a video streaming service for African entertainment from Sparrow and other African film producers. In 2013, she was ranked the 48th most influential person in Ghana according to E.tv Ghana.

Frimpong-Manso is described as one who "seeks to raise the standard of film production in Ghana and Africa by telling progressive African stories as seen through the eyes of Africans." According to her, she went into movies to change the way Ghana was portrayed.Her films are also known for their "fierce female leads," as they portray African women with agency who can be breadwinners and lead complex lives.

Frimpong-Manso is from the Eastern Region of Ghana, from Kwahu Pepease. As a child she organized plays, which "felt a lot more fun than playing with sand and dolls." She graduated in 2000 from the National Film and Television Institute of Ghana and worked as a presenter at Radio Gold, a private station in Accra, and then went on to start Sparrow Productions in 2003.

Shirley is currently married to her husband and business partner Ken Attoh. She and her spouse have a child together.

With producer and actress Juliet Asante, Frimpong-Manso helped produce the TV show Heart to Heart for two years shortly after school. She has also produced:

Different Shades of Blue - a television series about five university girls who share a dormitory in a university hostel.
Personalities Kitchen - a cooking program that hosts two personalities and challenges them to a rice meal of their choice.
The Miss Ghana Pageant - she produced two semifinalists at the Miss World event within five years during her time.