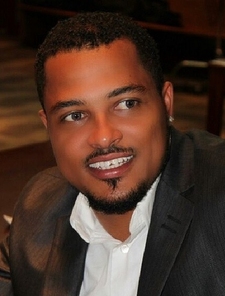 Vicker was born to a Liberian mother and a Dutch father. His father died when he was six years old. He has often cited in interviews that he considers himself a global citizen as he was raised all over the world by his mother. Due to the early death of his father Vicker has stated that he is very close to his mother and considers her his hero.

Vicker attended Mfantsipim School,[6] along with fellow actor Majid Michel. Mfantsipim is also the alma mater of former
Secretary-General of the United Nations, Kofi Annan.
Television
Vicker started out in the entertainment world in radio as a presenter at Groove 106.3 fm (1999–2000) & Vibe 91.9fm (2001–04) and as a television personality for TV3 Ghana (1997–99) & Metro TV (2000–04), Vicker appeared in the Ghanaian television series Suncity, which depicted university life. He played the character of LeRoy King, Jr, a fine arts student born in the U.S. who arrives at Suncity to complete his education. The series ran for a total of 10 episodes.

Soon, Vicker was cast in his first film Divine Love as a supporting character. This film coincidentally was also the debut roles for fellow actors Jackie Aygemang and Majid Michel who were cast in the female and male lead respectively.

Vicker is usually cast as the male romantic lead, often alongside actresses Jackie Aygemang and Nadia Buari. He is often compared to fellow Ghanaian actor Majid Michel and Nigerian Ramsey Nouah.
Vicker has appeared in numerous Nollywood films alongside prominent Nollywood actors, including Tonto Dikeh, Mercy Johnson, Stephanie Okereke, Chika Ike and Jim Iyke. His Nollywood movies include My Soul Mate, Heart of Fire, Popular King, Gambling with Marriage, Harvest of Love, Stolen Will, The Joy of a Prince, Discovered, The Kingdom and Against the law.

Vicker is one of the renowned African actors worldwide. He has directed, starred and produced five films under his sky + Orange Productions since 2008. 2012 was the brightest year for his production house earning him best actor and director for his smash comedy Joni waka.

Vicker has won and has been nominated for numerous awards from Africa to the Caribbean. Awards include Ghana Movie Awards, ACRAG awards and the Nollywood Academy Films Critics’ Awards. In 2009, he won the Best African Caribbean actor and Best Actor African American and in 2011 he won the Pan African creative actor.[10] In 2013, he won the Best International Actor award at the Papyrus Magazine Screen Actors Awards (PAMSAA) 2013, which was held in Abuja, Nigeria.
Vicker is married to Adjoa Vicker and they have three children, two daughters and a son. He is the CEO of Sky + Orange Productions, a film production house. Van Vicker Training facility is the latest entrepreneurship of Vicker, where students are trained in the field in acting by professionals. The Van Vicker Foundation is an outreach program for the youth.