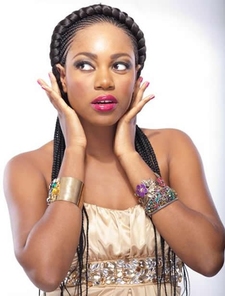 Yvonne Nelson (born 12 November 1985) is a Ghanaian actress, model, film producer and an entrepreneur. She has starred in several movies including House of Gold (2013) and Any Other Monday.Nelson was born in Accra but she is a Fante whose hometown is in Cape Coast. She started her education at St. Martin De Porres School in Accra and later went to Aggrey Memorial Senior High School. She had her tertiary education at Central University College, where she did a degree course in Human Resource Management.

Her first lead role was the title character in the movie Princess Tyra. She shot about five more movies and then went to Nigeria to shoot her first collaboration with Genevieve Nnaji in 2007, which launched her career in Nollywood. Nigerian movie industry Since then, she has become a household name in the movie industry.

Nelson produced her first movie, The Price, in 2011, followed by Single And Married the next year. The latter won Best Picture at the Ghana Movie Awards and Best Ghanaian Movie in Nigeria at the 2013 City People Awards.

She followed these up with House of Gold in 2013.
She founded the Yvonne Nelson Glaucoma Foundation in 2010 to help create awareness about the disease. With support from other Ghanaian celebrities, she recorded an all-star charity single, and shot a video to help educate people. In 2013 she was honoured by GoWoman Magazine & Printex for her Glaucoma Foundation and film career.In recent times, Nelson has taken it upon herself, together with other celebrities, to add more voices to the masses in protests against the energy crisis in her country. She led a peaceful vigil on May 16, 2015, called DumsorMustStop. The hashtag #dumsormuststop is currently used on social media to amplify the concerns of Ghanaians with regards to the energy crisis. She welcomed improvements.