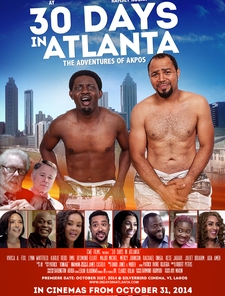 Sharp Warri boy,” aptly describes the Akpos character. He is our very own Rowan Atkinson (Mr. Bean) and Chris Rock rolled into one. In Akpos In Atlanta, he wins a 30-day holiday for two to Atlanta, Georgia. He takes his cousin (Richard), an IT specialist on the all-expense paid trip.

Akpos In Atlanta is an adventurous love story – spiced with lots of action and hilarious moments. This a-laugh-a-minute story has been fully researched and well written. It paints, in beautiful colours, the hugely popular (and social media trending) Akpos character which was created from the AYShow’s Who Wants To Be A Billionaire hilarious skits.

Right from Warri until he landed in Atlanta, Akpos flung his unique personality, showing-off his smartness and foolishness in an exciting mix of rhetoric and witty humour. An impromptu social commentator and self-appointed psychologist, Akpos finds relevance in everything and everyone around them.

Soon, he begins to enjoy his stay in Atlanta. His Warri accents and instincts almost turned him into a Hollywood Celebrity.

Akpos, like all of us, is human. He would have his high and low moments. He would fall in and out of love. He would break hearts and get heartbroken himself. He would make mistakes and learn from them. And at the end of the day, he would remain a Vintage Akpos – the boy from the World’s only WARRI.