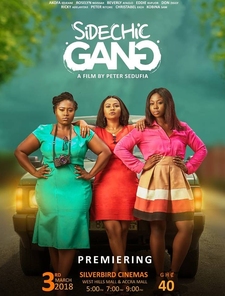 Three female friends find out they can make fortunes from exposing cheating husbands and boyfriends after making tons of cash unexpectedly from reporting a cheating husband to the wife.

They quit their ushering job to set up “Sidechic Gang” – an agency solely dedicated to clamping down the side chick menace. Their services are available to only women. After few exposè, their Sidechic Gang becomes popular, attracting traffic from victims of side chicks. This translates into more cash for them. The men in the town are unhappy with the sudden popularity of the gang.

The Sidechic Gang’s biggest deal is yet to hit them. It comes from a filthy rich man who suspects his fiancée is cheating on him. He is aware the gang does not serve men, but, he is willing to pay anything it costs to justify his suspicion. The gang takes on the task. They know what this means for their bank account. Their greatest opposition, however, is the many aggrieved men who benefit from the services of side chicks, and would do anything to ensure they fail.

Will the Sidechic Gang succeed in their quest or, the aggrieved men will?

A Letter From Adam

1 Hour to the Wedding